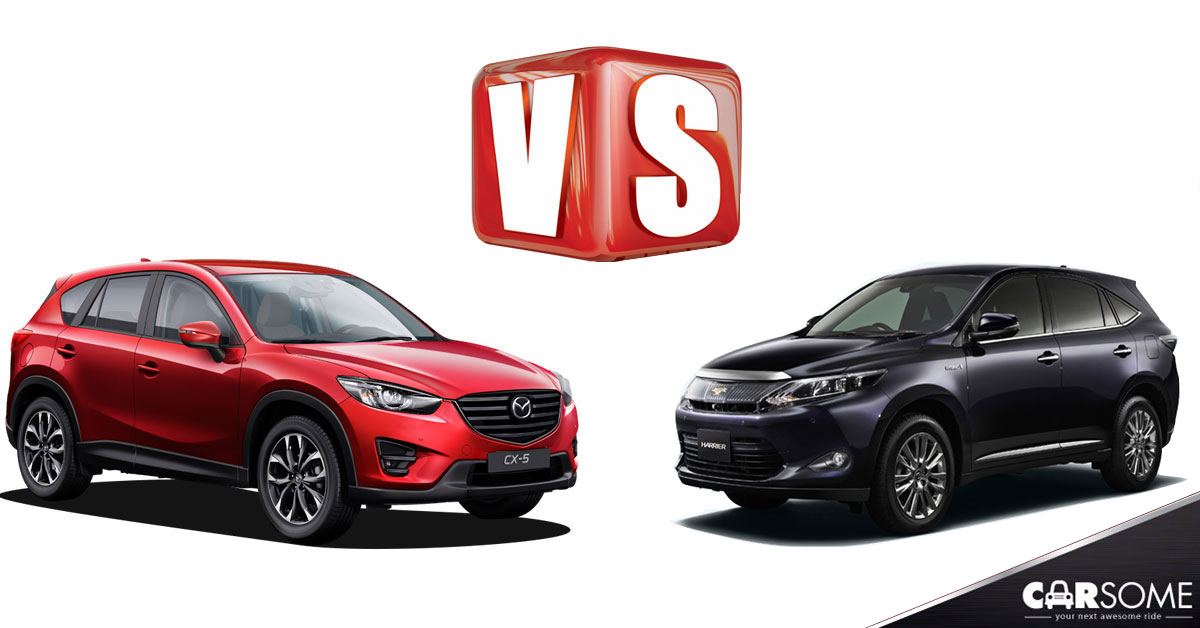 As much as we’d prioritize a more-practical and space-saving car, we want to feel a sense of strength and confidence in our cars, the feeling of being protected inside a cocoon that is both comfortable and rugged at the same time, which is why some of us opt for SUVs instead of sedans or hatchbacks. With SUVs becoming more and more fitting for the urban lifestyle as the years go by, SUVs are becoming a solid option to be used as a family car.

Today on Carsome, we’re showing you 2 good C-segment SUVs by 2 different Japanese carmakers that give you a delicate balance between strength and mobility, the Toyota Harrier and the Mazda CX-5.

Designed for the Urban Lifestyle 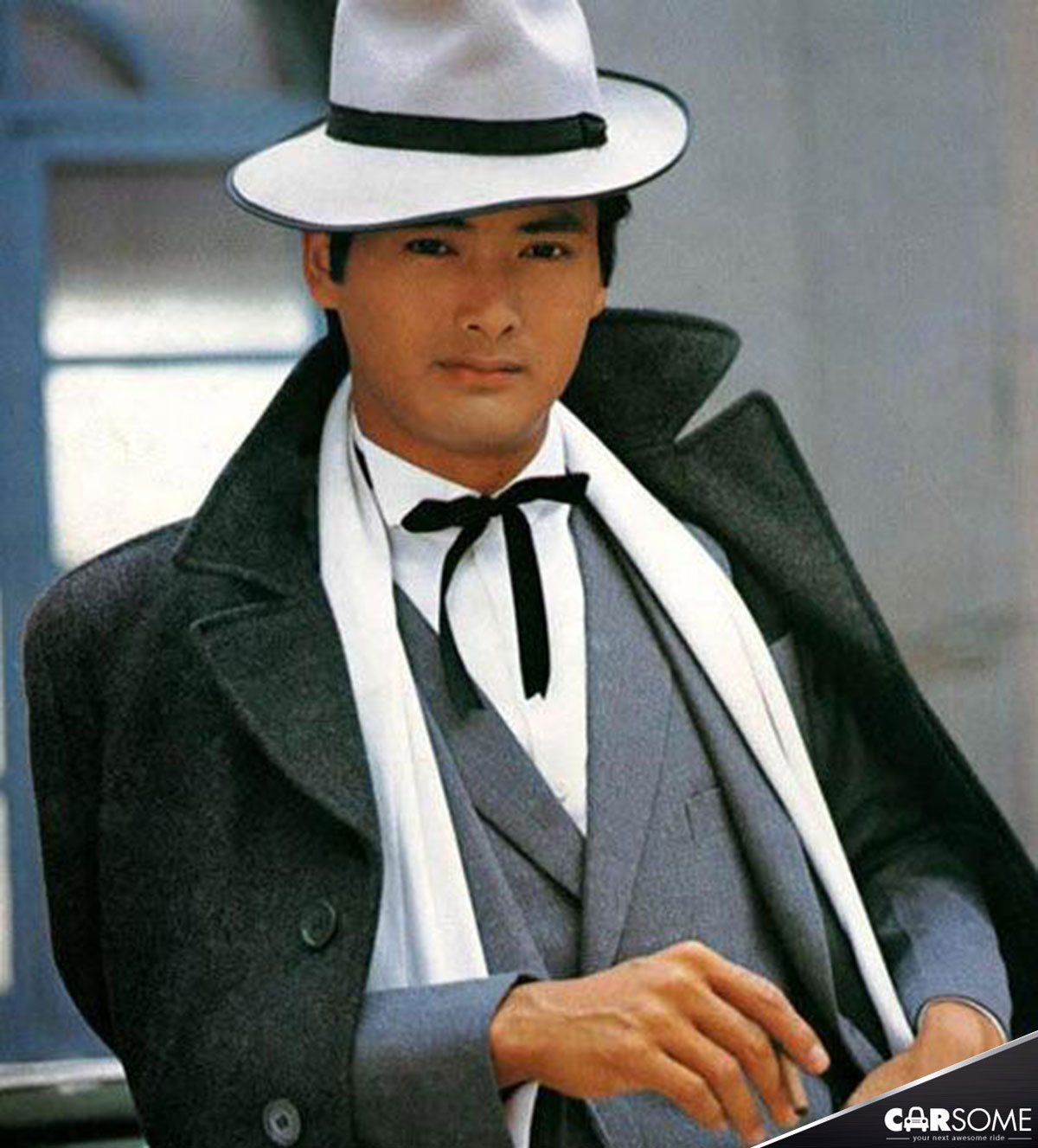 Looks are a subjective matter, but to us, both the Toyota Harrier and the Mazda CX-5 looks great. The CX-5 has a more rounded and aggressive look with front grilles reminiscent of its own Mazda 2 and 3, which is mostly likely due to its Skyactiv body technology for a stronger yet aerodynamic build, while the Harrier looks wider, more rugger, yet classy with its accented styling and forward-leaning quarter pillars giving it a speedy SUV appearance. If they gave the Harrier a Lexus emblem instead, not only is it believable, it looks more fitting that way.

It’s pretty spacious for the inside on both cars. In fact, we didn’t even notice the difference in dimensions for both cars when we sat inside. The Harrier has a luggage capacity of 440 litres, so you can actually fit a couple of baby seats along with a stroller, and you’ll still have a bit of space leftover. The CX-5 is even more spacious at 501 litres, which means you can put even more stuff at the back if you plan on going around with your family.

Both the CX-5 and the Harrier have a premium, business-like design for the interior, including the dashboard. Added together with leather seats, it feels like sitting inside a luxurious C-segment sedan rather than an SUV for both vehicles.

What’s Under the Hood? 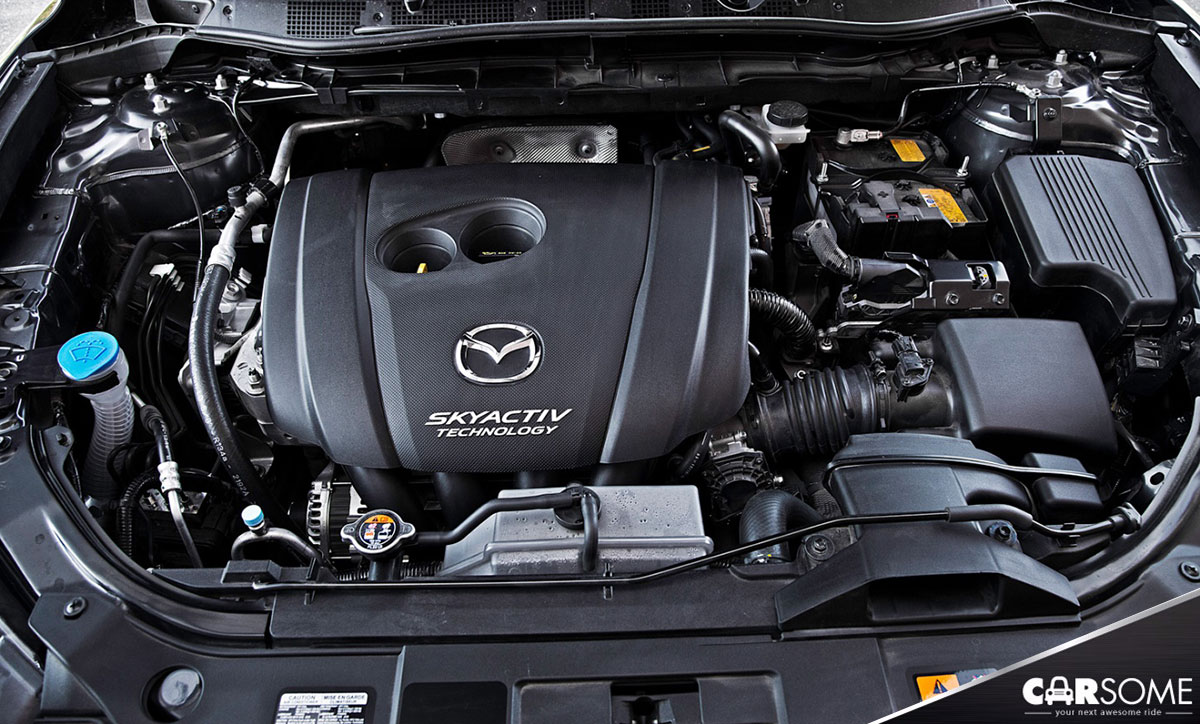 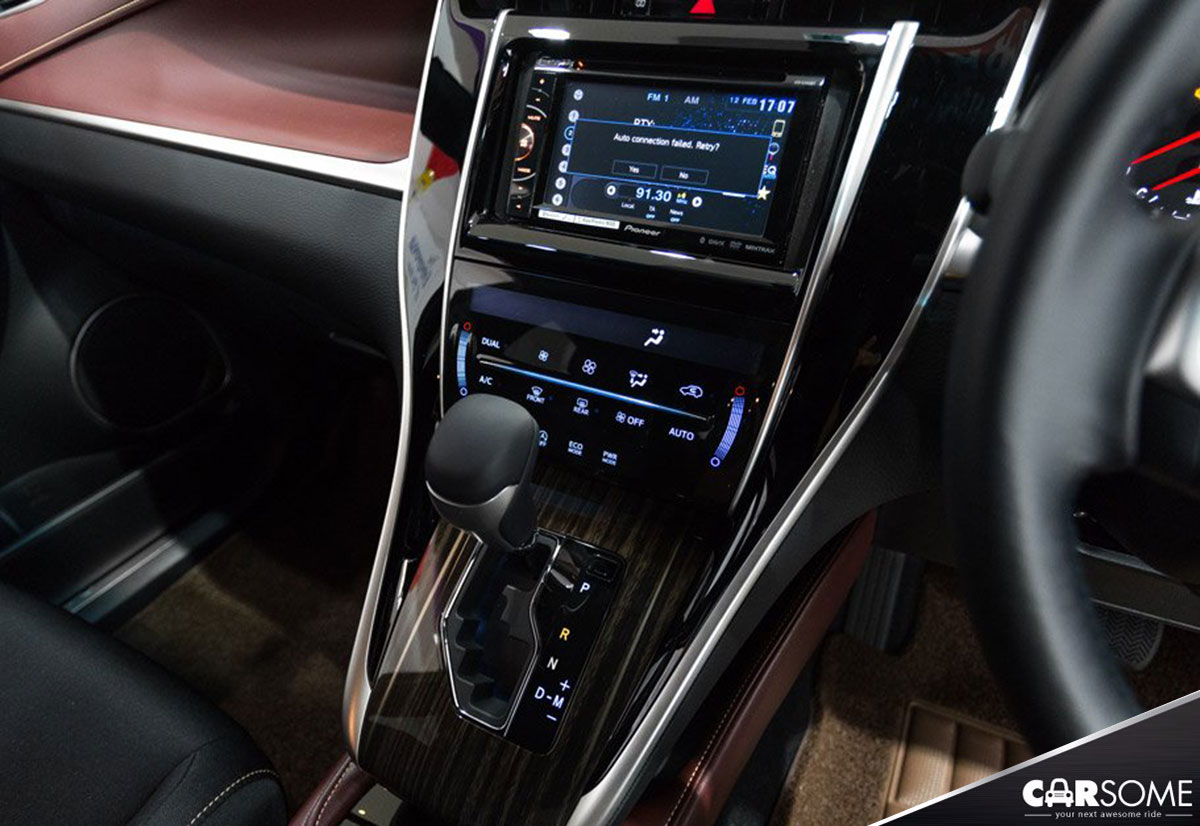 It’s rather interesting to see that the CX-5 has more torque and brake horsepower when compared to the Toyota Harrier. We expected one of them to be stronger in terms of power while the other is stronger in torque, but that doesn’t seem to be the case here. This means that on paper, the 2.0L CX-5 has better overall speed and acceleration compared to the 2.0L Harrier. 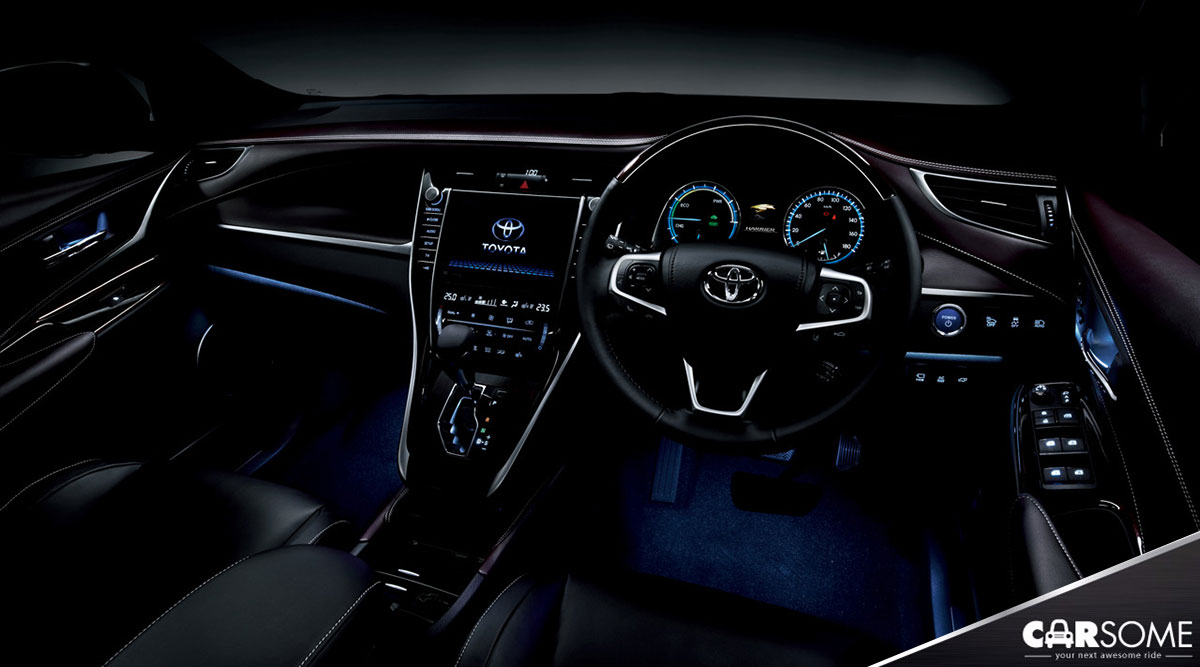 The Toyota Harrier is packed with the following features:

If you opt for the Premium variant, you’ll also have cruise control, Lane Departure Alert (LDA), electric tailgate, and rain sensing wipers, along with a set of 18-inch rims as opposed to 17-inch rims. If you want a sunroof for your Harrier, you’ll need to ask for it as both the Premium and Elegance variant have versions that come with and without a sunroof. 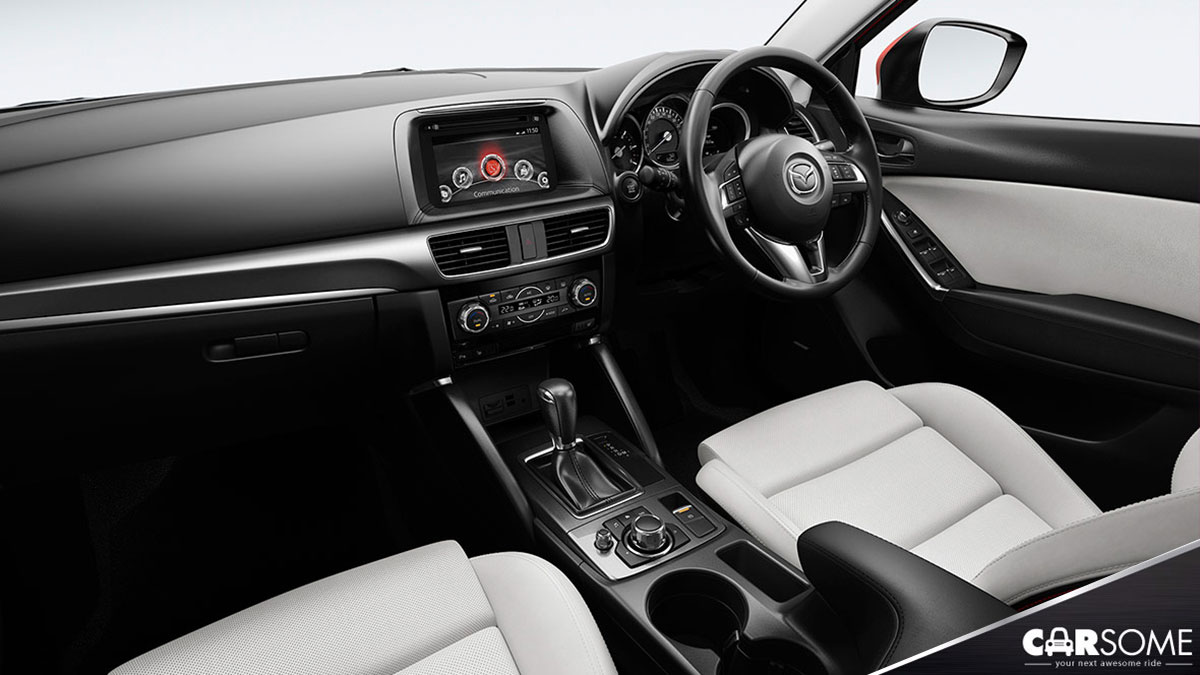 The Mazda CX-5 is packed with:

If you opt for the Premium variant, you’ll also have a smart keyless entry system, Adaptive Front Light (AFL) system, and a Bose premium audio system. As far as features go, it looks like the CX-5 is the more feature-packed SUV, but the Harrier isn’t exactly badly lacking in the department as well.

We did mention about the cars' equipment but let's talk a little more in-depth about their safety features. For starters, there are no seatbelts that are attached to the neck for both cars, as that will do more harm than protect.

The 7 airbags will not only protect the driver's upper body, but also their knees, as well as the passengers via side curtain airbags. The reinforced pillars and crumple zones are designed to absorb as much crash impact as well as deflect the energy of the crash away from the passengers, which minimizes the risk of injury or death that may occur during a crash.The CX-5's 6 airbags consist of the front, side, and curtain airbags that prioritizes the upper body of the driver and its passengers above all else. The CX-5's body is also designed to absorb as much impact as possible without allowing the cabin to collapse, ensuring the safety of the people inside in the event of a crash.

Both cars come with ABS and Traction Control, which are extremely important if the road gets wet, as our tropical climate forces us to see rain often. ABS ensures that the appropriate amount of brakeforce is used and distributed evenly to the wheels so that your wheels won't lock up and force the car to skid off while Traction Control ensures that your car will maintain a good grip with the road, even if it's slippery, so that you won't lose control during turns. The CX-5 comes with Dynamic Stability Control, which prevents the car from oversteering or understeering. A similar system is also implemented in all variants of the Harrier, but it's called the Vehicle Stability Control instead.

The Harrier's Premium variant has the Lane Departure Alert feature, where the car will monitor your journey and start to vibrate the steering wheel the moment you start veering off-course to alert you that you're going off the lane, unless the turn signals are used. This will be pretty handy in case the driver falls asleep as, let's face it, with an SUV this comfortable, it's hard to not fall asleep. 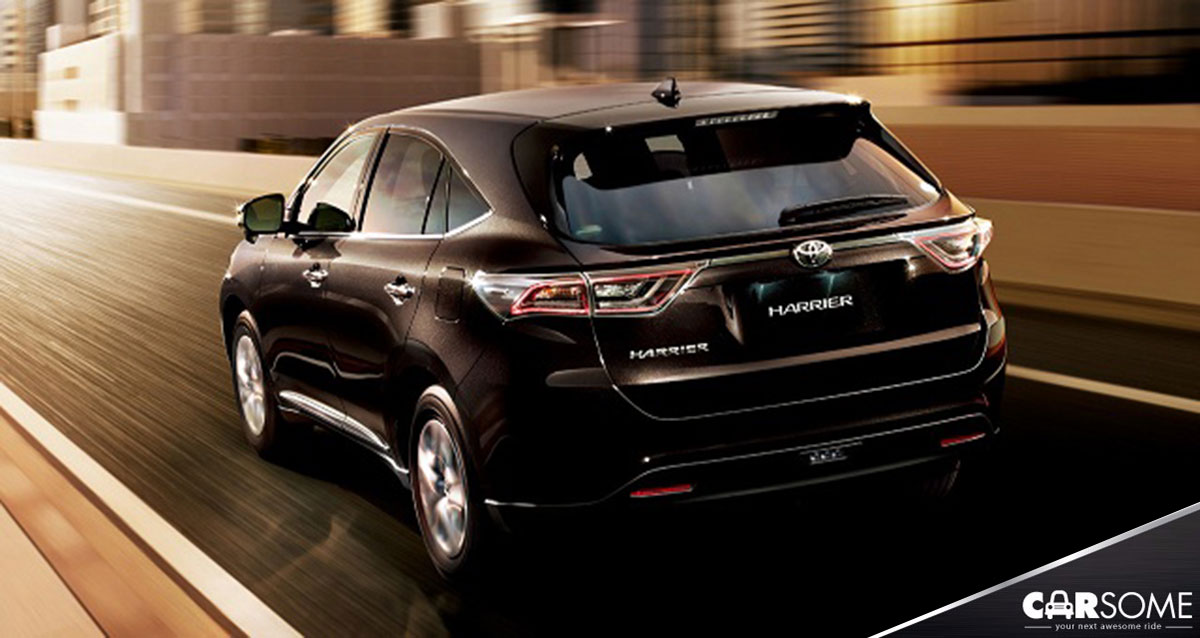 With the Toyota Harrier, the drive feels firm and comfortable, which makes long distance travels with the family a lot more tolerable. It would seem that the suspension does a great job in absorbing impact, such as driving through uneven terrain, rather than being a jumpy ride. One would think that the height would cause the ride to feel a little wobbly but that’s definitely not the case here. In fact, the car feels solid with an adequate amount of soundproofing, which adds on to its comfort factor. It’s also thanks to its height that you’ll get a clearer view of the roads.

It doesn’t seem to struggle with accelerations and maintaining speed, and its ECO mode helps improve the Harrier’s fuel consumption, which is a major plus point for many. Gear shifts are buttery smooth and quiet, a major plus point if you’re driving with kids in the car, and they happen to fall asleep in the comforts of the Harrier. On the overall feel of it, the Harrier is so comfortable that the passengers will sleep like a baby.

Furthermore, its 7-speed transmission allows it to maintain speeds at lower RPM, which means lesser engine noise, improved fuel efficiency, and a more comfortable driving distance if you happen to go for a long distance adventure with the family to visit relatives or just a simple road trip. The Harrier’s fuel efficiency is rated at 16km/l for mixed driving conditions. If you ever require more power from the Harrier, there is a ‘PWR’ that can be activated for a livelier pick up, but that will definitely affect its fuel efficiency. 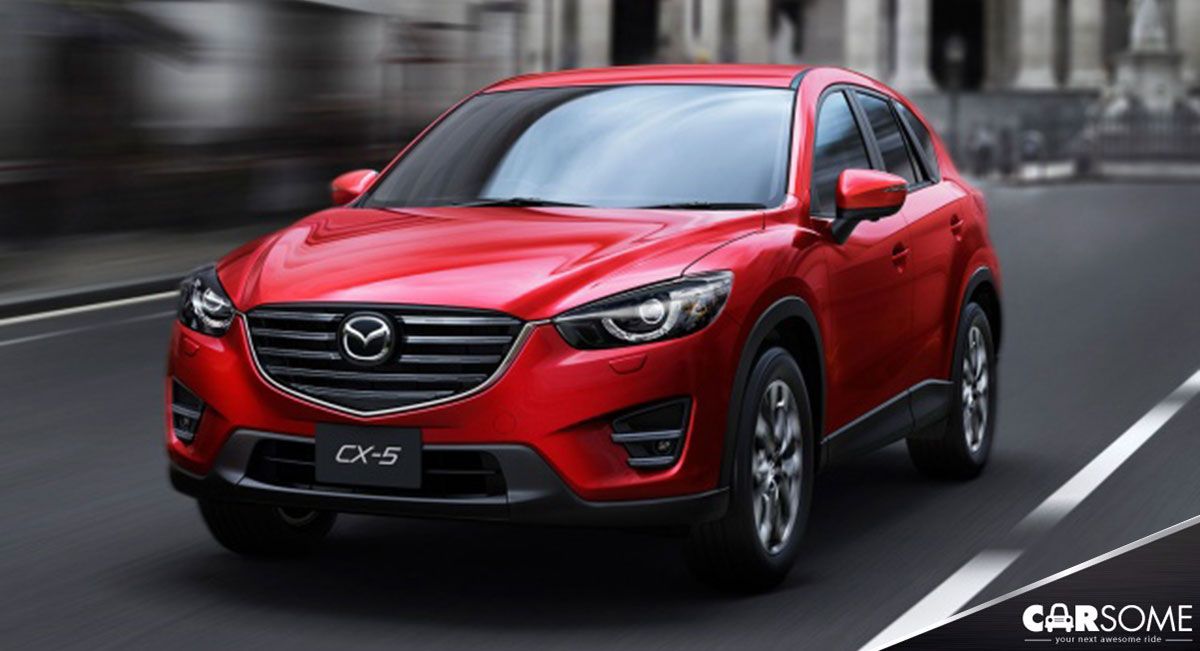 With the CX-5 on the other hand, the drive is also firm and comfortable but, it’s a bit noisier compared to the Harrier. The CX-5’s interior isn’t hollow but it’s strange to see that it’s not able to meet the same level of Noise Level and Harshness (NVH) as the Harrier. The kids sitting in the back of the car may not have a pleasant sleeping experience during long trips though.

While the CX-5 is capable of going high speeds, it does take a bit of time to accelerate. This is most likely done by Mazda to improve the fuel economy of the CX-5, so people wouldn’t be able to accelerate too fast and needlessly burn fuel off. Unlike the Harrier’s ECO mode however, you can’t exactly improve the acceleration with a push of a button. This may not be much of an issue if you're going on long trips with the family but if you're going to be stuck driving in urban areas, the driving experience may not be so pleasant.

Gear shifts are also smooth on the CX-5, and we don’t see any issues or differences in driving with a 6-speed transmission instead of a 7-speeder. You’ll most likely see a small benefit in 7-speeders if you drive mostly on highways as 7-speeders are able to run in lower RPMs at the same speed. The CX-5’s fuel efficiency is rated at 15.6km/l for mixed driving conditions. On the overall feel of it, it's still pretty comfortable to drive the family around but definitely not as comfortable as the Harrier. 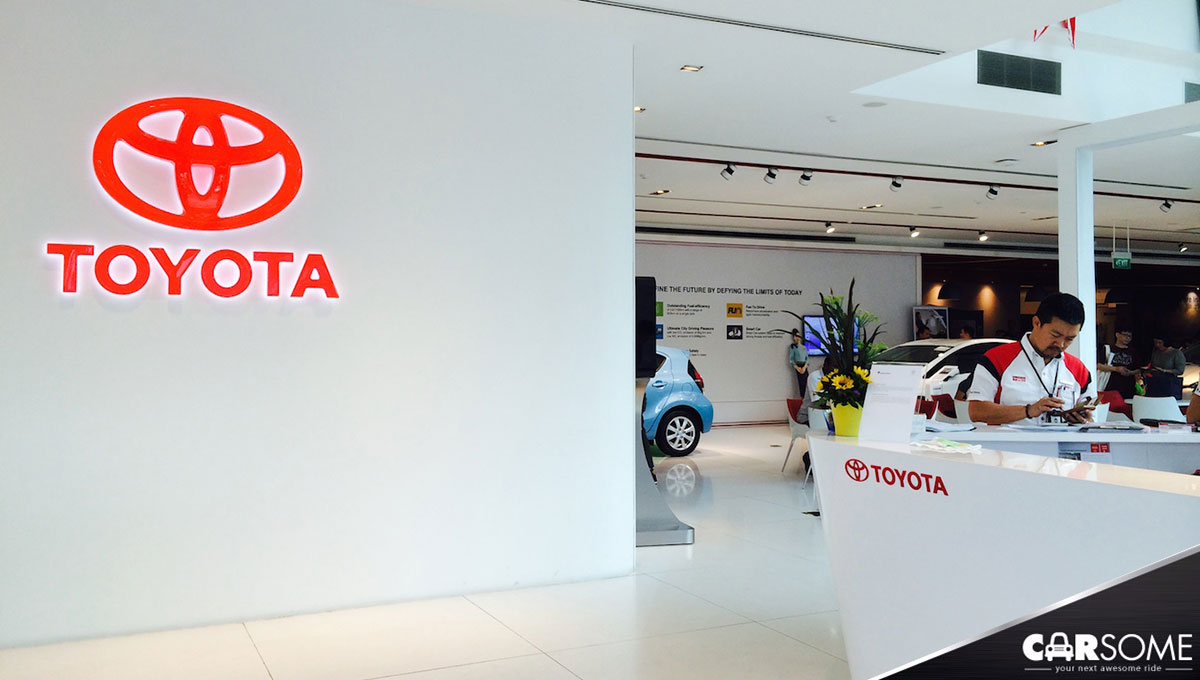 Now here’s the big difference between the Toyota Harrier and the Mazda CX-5. The Harrier is available via Parallel Importers (PI), while the CX-5 is available via Authorized Distributors (AD). While it’s true that PI cars are generally cheaper than AD cars, that may not be the case for this one, as the Harrier can go from SGD132,000 to SGD 155,000, while the CX-5 is about SGD130,888 to SGD 135,888.

With regards to the whole PI and AD debacle, there’s also the warranty period to consider. Normally, PI cars will not have a warranty period of more than 3 years, but there are some that offer more than that. As far as reliability with the warranty claims however, that we can’t comment much as it differs from dealer to dealer. The AD for Mazda is offering a 3-year warranty package with an option to extend it for another 2 years, making it a total of 5 years. 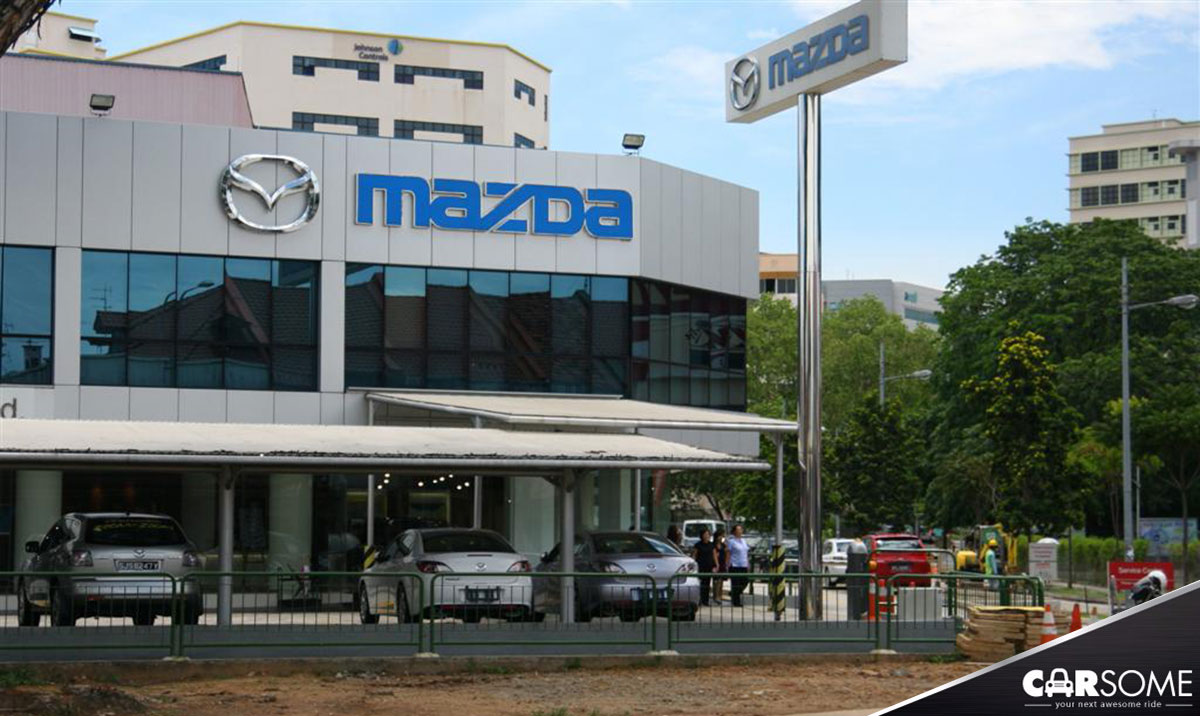 Speaking of PI and AD dealerships, the Harrier's average OMV is about SGD26,000 to SGD28,000 while the CX-5's average OMV is about SGD22,000 to SGD 23,000, which is intrigueing as PI cars normally have lower OMVs compared to AD cars but to be fair, the Harrier is priced higher than the CX-5. If you want to calculate the applicable OMV for the car, you'll have to use the formula of (OMV / 120 months) x number of remaining months.

At this point, we hope you have a clearer image as to which car to choose. Both cars aren’t exactly worlds apart in terms of comfort, performance, and fuel efficiency. We honestly can’t see or feel any difference with the 6-speed and 7-speed transmissions so if there are any differences, it’s most likely not big enough to like one over the other, so your choice between the two SUVs most likely boil down to the features that you need in a car and buying from either an AD or PI car.

An interesting thing to note is that the Mazda 6 has two major issues, suspension and noise. Users have complained about needing to change suspensions not too long from the day of purchase, which isn’t a good sign. We’ve personally felt that the CX-5 is a bit noisy but as far as the suspension issues go with the CX-5, it remains to be seen.

If you don’t have to read the entire thing, don’t worry. Once you have enough time in your hands, you can read the full article but for now, we’ve summarized the main points of both the Toyota Harrier and the Mazda CX-5 right below:

If you're looking for more SUV choices, check out our comparison article for the Honda Vezel and Nissan Qashqai by clicking here.