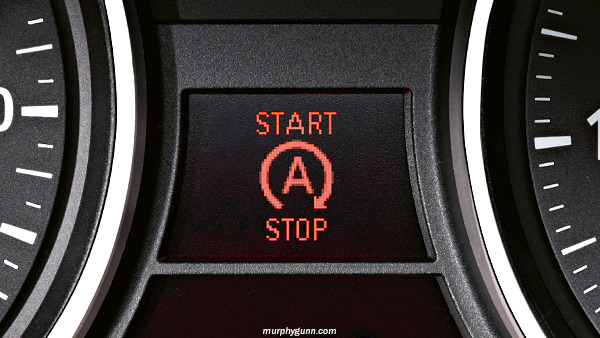 Previously in our article on What is – Auto Stop-Start System, we talked about what it was, how it works and briefly, its origins. As the system gains prominence, even amongst our local manufacturers, we decided to weigh in on the Pros ’n’ Cons of it.

Is it really able to kill two birds, in fact three; saving fuel, saving mother nature while driving a petrol-powered vehicle, with one stone?

It’s strange how most reports, despite noting that part of the reason this system exists is to reduce emissions, do not actually mention how much emissions are reduced every time an engine stalls.

That said, it was claimed by AAA in a new research that the systems are able to provide 5% to 7% reduction in carbon-dioxide emissions.

There have been reports of fuel savings ranging from as low as 3% to as high as 12%.  Although, it would probably be more practical and effective to have them on only during the long waits and not during stop-go traffic.

Having experienced the auto stop-start system in peak hour traffic, moving inch by inch, we ourselves can attest that the jerks from the stop-start motions can be quite profound but it tends to differ. Some cars appear to have more seamless systems in place compared to others.

Engine Components Could Wear Out Faster

There is a point just before an engine is started where the surfaces of main bearings and crankshaft are in contact, and so because the stop-start cycles have increased ten folds, it is also possible that engine’s main bearing could wear out just as quickly.

Although they may have been built for robustness, the frequency of the stop-start motions could also affect the durability of the alternator and starter motors – these things, we assume, aren’t exactly cheap to replace either.

For motorists who fail to adhere to basic car maintenance demands like replacing their worn out brake pads or tires, this is could be an even bigger nightmare. As the start-stop cycles increase dramatically due to the automated system, this poses major durability challenges for the engines main bearings.

This is where the quality of the lubricants (some with low friction coatings capable of reducing friction up to 50%) used would have a part to pay in how quickly the bearings wear out. Obviously, quality lubricants also mean a good quality amount of money.

Simpletons like us think the system is completely unnecessary and unnecessarily complicates a car’s system; to be featured in our country, since majority of our cars here are of lower engine capacity.

At the end of the day, taking into account the costs, the fuel savings will not be able to justify the costs in replacing the major components that make up this auto-stop start system. Manufacturing vehicles with small capacity engines (with or without forced induction) on a lightweight chassis is probably still the way to go for now; take Mazda for example and their SkyActiv systems.

What is Hydroplaning? Find out how you could avoid that slippery situation here!